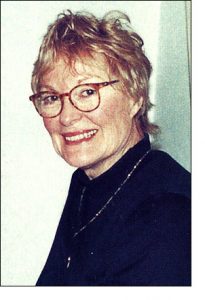 Lorna Robertson was born in New York City. Her childhood years were spent in New England, where her parents relocated shortly after her birth. As a child, and in her early youth,she showed talent in the arts. She also excelled in athletics, especially swimming. She received a full athletic scholarship at Purdue University. As captain of the women’s AAU championship swimming team, she also maintained Dean’s List standing. She majored in Chemistry, graduating with honors.  During this time, she devoted her full attention to scholastic and athletic endeavors. Later in life, her energy was spent raising a family of four children and managing a successful family real estate business. She postponed responding to her true passion – painting – until recent years. She is now completely immersed in the fulfillment of her artistic expression, resulting in a prolific outpouring of works, displayed in diverse and adventurous venues.

The subjects of Ms. Robertson’s work are varied: figures, portraits, and abstractions. Similar to Matisse, she pursues divergent artistic styles. “I move around a lot in my work,” she said. “I can’t keep doing the same thing over and over.” One of her portraits, “Bevy’s First Day in Paris”, carries very personal significance for the artist. It’s a painting that is evocative of the light in Southern France, of Picasso and Parisian cafés. Its brilliant color and vivacious handling of the paint contrasts with the serenity of the sites. Bevy, a writer, and a character familiar to SoHo denizens as a proprietor of a bed and breakfast, was Ms. Robertson’s studio mate in Paris. She explained, “All the geometric construction was done in Paris. When I got back to New York, I finished it in a burst of color.”

She also has a robust sense of humor , that comes through in her witty titles, such as de “Kooning’ s Cow” and “Sartre’s Cat”.  She says, ” I painted Sartre’s Cat while in Switzerland. I named it “Suicidal Cat”, because it looked as if it was about to leap from a building. So, I thought, this cat is really an existentialist.” However, she does have a somber side, as represented in the in the Fauve-colored, “The Mad Housewife”. It is an outline of a figure surrounded with a crazy quilt of opposing multi-colored painted lines, creating an erupting tension.  Ms. Robertson, reflects, “…This is a an auto portrait, I was in pieces and this was the beginning of my rebirth…”.

Present in the diversity of Ms. Robertsons’ work, the viewer will witness the life force present in all things.